I feel as though I may be in line for a job at the Sun newspaper if I keep on with titles like this one. Yes, that’s right just back from a sunny albeit brief break in the Basque region of Spain. The trip was to film a section for Reset Films new movie called Find and we were being shown around by Doug from Basque mtb and his girlfriend Amaia who made us feel  really welcome.

The riding out there is great and it’s a perfect getaway from our unpredictable and often bad weather, you have sun, sea and mountains, a perfect combo.

One of the days we hiked up to the top of a mountain to enjoy the rocky descent back down, on the top there were hundreds of different crosses erected by local people, it was quite eerie up there. 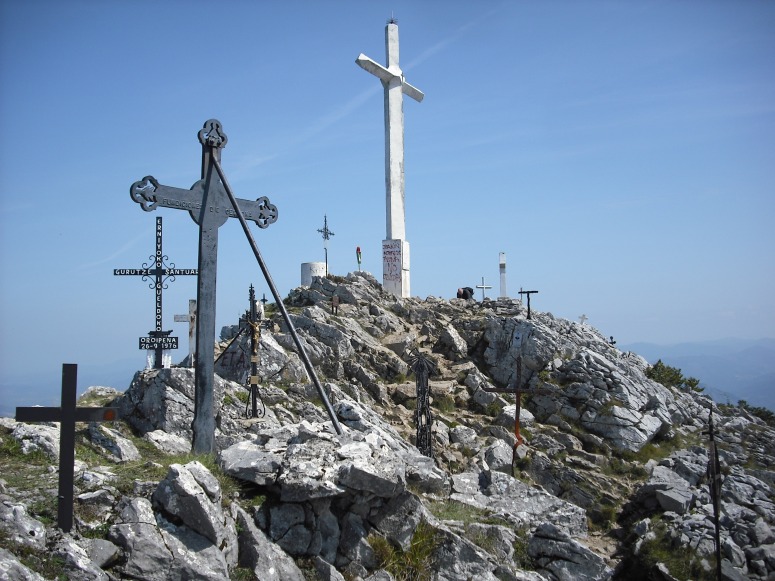 One scene we shot for the film took us to a monastery perched atop a small rock island, the monks had build a huge raised causeway that now ensured that it was accessible at all times and a flight of winding stairs took you up to the monastery. We decided it would be cool to go up there, ride it and shoot it. Pushing up I could soon see the sheer drop to either side of the low walls, over 150ft in places with just a 2ft wall to stop you. I don’t normally suffer from vertigo but pushing up and looking at this did make me feel a bit queasy.

We were up at the top super early to get the sun rise and early morning light, the monastry had a big bell which I gave a good ringing, well why not? We were the only ones about at that time in the morning. It made a right old racket, when we rocked back to the van Doung said ‘did you ring the bell?’

‘well all the monks are still asleep in there!’

Check out the footage on Reset films upcoming film, Find

Fancy a biking break in the Basque region then get in touch with Basque MTB: www.basquemtb.com